We look forward to seeing you!

A great team of parishioners. 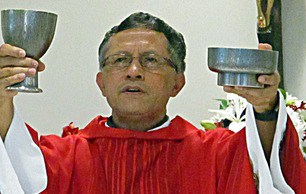 Born and raised in Tagbilaran City, Bohol, Philippines, Father Ramon entered the Divine Word Seminary and studied at the University of San Carlos in Cebu City, Philippines. He attended the Divine Word Major Seminary in Tagaytay City, where he earned his Master’s Degree in Philosophy. Fr. Bolatete was ordained a Divine Word missionary on October 19, 1985 and spent the next four years as a missionary in Papua, New Guinea. He also has a Master’s Degree in Missiology, from St. Paul’s University in Ottawa, Canada.

While in Canada Fr. Ramon took graduate studies for two years before working with the Diocese of Grand Falls, Newfoundland, as Parochial Administrator to the parishes of Harbour Main and Clarenville for the next three years. He then enjoyed his next five years serving God as Pastor of the Immaculate Conception Parish of Harbour Grace.

From there he moved to the United States and was incardinated into the Diocese of Orlando, Florida, in early 2010.