We look forward to seeing you!

Learn more about St. Faustina and how our Parish got started.

We are so proud to be spiritually connected to this beautiful Saint, St. Faustina. Learn more about her and her related relics.

Plus, read more about our Parish, and how we ended up in our Clermont location. And check out our new building construction.

CLICK HERE to learn more about our latest new Church Construction Update.
And CHECK OUT our latest CONSTRUCTION PHOTOS.

“O Jesus, stretched out upon the cross, I implore You, give me the grace of following faithfully the most holy will of Your Father in all things, always and everywhere. And when this will of God seems to me very harsh and difficult to fulfill, it is then I beg You, Jesus, may power and strength flow upon me from Your wounds, and may my lips keep repeating – Your will be done, O Lord (…) O most compassionate Jesus, grant me the grace to forget myself that I may live totally for souls, helping You in the work of salvation, according to the most holy will of Your Father…” (Diary, 1265).

The story of St. Faustina Catholic Church has its beginnings in a hotel banquet room at Westgate Inn on Route 192. Established in the summer of 2006 by former Diocesan of Orlando Bishop, Thomas Wenski, in the Four Corners area, the parish’s first Mass was held on September 30, 2006 at 4 pm. Our founding pastor, Father Stephen Phillips, presided over that Mass with 65 parishioners in attendance.  When Bishop Wenski established St. Faustina Catholic Parish, he wrote that this was the first parish named in the United States for this great saint, Faustina Kowalska. 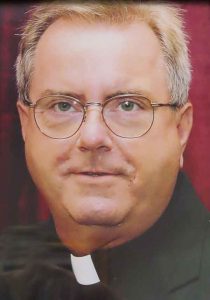 The choir for that Mass consisted of just two people, Willie Nelson and Conway Twitty… and they were not among the attendees! A banquet room served as the location for the Mass, and unfortunately, it was situated next to a bar. Father Steve, a stoic individual who beamed with his love for God, grew increasingly irritated as his concentration during the Consecration was continually broken by the two Country and Western icons. It wasn’t until Father’s sister, Mary, offered the bartender some homemade chocolate chip cookies, which were to be distributed at the post-Mass celebration, that Willie and Conway stopped their jukebox concert. The rest of the Mass went on without incident.

Within three months we outgrew Westgate and moved into Homer’s. IT WAS THE PITS!! … actually, it was a former barbecue pit restaurant located on Highway 27. Father Steve referred to it as, “The Church of Holy Smokes” while the parishioners affectionately called it, “Saint Homers.”

It took a lot of backbreaking work to convert the place into a suitable worship site. A number of parishioners displayed the true meaning of stewardship as they used their time, talents, and treasures to make this our second home. The scrubbing of thick cooking oil from the walls and the cleaning of dirty floors were just some of the tasks. People showed up with their own tools, paint brushes and other carpentry items, and just worked and worked and worked.

The men created a terrace from the dirt floor of the open-air shed…yes is really was originally a shed that they turned into another section of the church…in order to hold our quickly growing congregation. A concrete floor was poured by a volunteer and the men enclosed the open space. A camera was set up in the main church and a large-screen TV (one of the first of its kind…very big and VERY HEAVY) and speakers were put into the space, which created roughly 125 more seats for parishioners and visitors.

The construction of certain necessary items, including an altar.  Parishioner Loretta Murphy, and her committee, sewed pocketed-coverings for the metal chairs, which allowed us to store our prayer hymnal books and prayer missals, were just two of the numerous details that had to be addressed before we could celebrate Mass.  Polo Park East allowed them to use their clubhouse for this project.

When the work was complete…and it NEVER seemed to really be complete. Father Steve celebrated the site’s first Mass on December 24, 2006. Faith Formation classes were also held in external area with teachers and parents having to rearrange the metal folding chairs around the long picnic-style tables that were needed for the students. After the week’s classes were completed, it was all rearranged back for Mass.

Four years later we were once again on the move, back to Route 192 and a strip mall called Zak’s, located just down the street from our original site at the West Gate Inn. Unfortunately, we made that move without Father Steve. While we were at St. Homer’s, God called our beloved Pastor Home on December 5, 2008. Father Fernando Gill, an associate pastor at Blessed Sacrament in the township of Clermont, said our weekend Masses until Father Jean Desirs accepted his first assignment as pastor and became our Spiritual Leader in February of 2009. 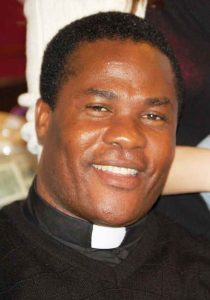 Located between a Tattoo Parlor and a Massage Parlor, our five-year stay at Zak’s offered our little parish a mix of highs and lows. Once again, parishioners of all ages chipped in and worked hard to turn three office suites into one place of worship. Ironically, Father Jean christened that location on December 24, 2010, EXACTLY four years since Father Steve had celebrated the first Mass at St. Homer’s. That celebration was made possible when parishioner Paul Casey gave up his Christmas vacation time in Vermont with his family that year in order to get our certificate of occupancy. Paul was handed that permit at 3:00 pm on Christmas Eve.  Mary, his wife, was in Vermont with their very large family.

There was no “affectionate” nickname for Zak’s, but it was bigger, brighter, and cleaner than St. Homer’s and we were able to have all the parishioners in one worship space. There was even enough room for some small offices and religious education classrooms. Additionally, the “Grotto of Mercy” room, which gave us a dedicated space for confessions, a quiet space for prayer and reflection, and an opportunity to honor St. Faustina, St. John Paul II, and Blessed Father Spocko, who was St. Faustina’s spiritual advisor.

Father Jean continued to lead us spiritually as well as guide our first fund-raising efforts. The initial fund-raising committee came together at this site and helped coordinate Walk-A-Thons, t-shirt sales, a silent auction, and a parish cook book, to name but a few activities. Parishioners gladly paid a “fee” to put their names in beautiful registers (those books are currently in our parish office) helping to raise thousands of dollars during our stay at Zak’s. In fact, by the time Father Jean was reassigned in July of 2012, the parish went from $0 to $500,000 dollars in fund-raising for what would someday be our new church building.

There were only a few parking spaces available to us in the front of the building…and boy did our neighbors express their displeasure when we used more than our share… so most of the parking was done in the rear. Even though we had that lot all to ourselves, there just wasn’t enough parking for our growing parish. Cars were parked on the blacktop pavement, they were parked on the side of the building, and they were parked on the knoll beyond the lot. Getting into the church was a nightmare…getting out was worse!! The only reason there weren’t any accidents or major disputes was because of the great efforts of our volunteer parking staff parishioners.

Our latest location in Clermont.

And so, we got bigger, moving to our current spot in Glenbrook Commons off of Highway 27, yup back to Highway 27, where  our first Mass was held on December 19, 2015. This space is the best we’ve had, featuring seating for 450 people with a foyer, modern restroom facilities, sufficient office space for our pastor and his staff, as well as classrooms, a front reception area, and a conference room.

And we’re not done!

Our current pastor, Father Ramon Bolatete, came to us on June 2, 2018, and will, God-willing, preside over the very first St. Faustina Mass in a church where we will be paying a mortgage (whoever thought that the need to pay a mortgage would sound so good!) in  the early part of 2023.

We’re so proud of all the parishioners who have been with us from the start. Posters were signed by each person to indicate their “original” status.  CLICK to see a list of those who signed the posters. 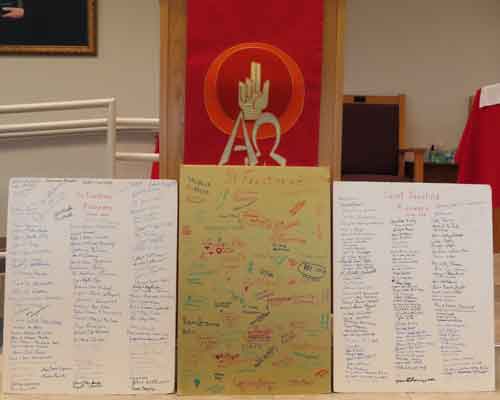 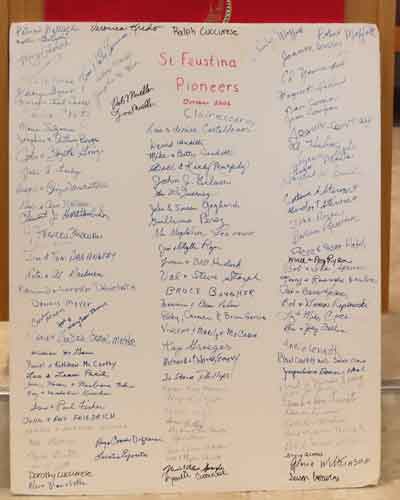 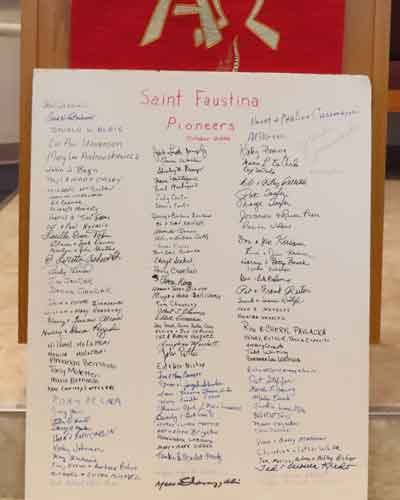 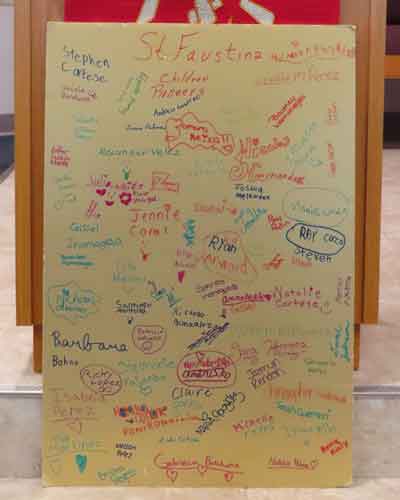 If you would like to be part of the process, we welcome your donation to our Construction Fund. CLICK HERE to donate to our new Church.